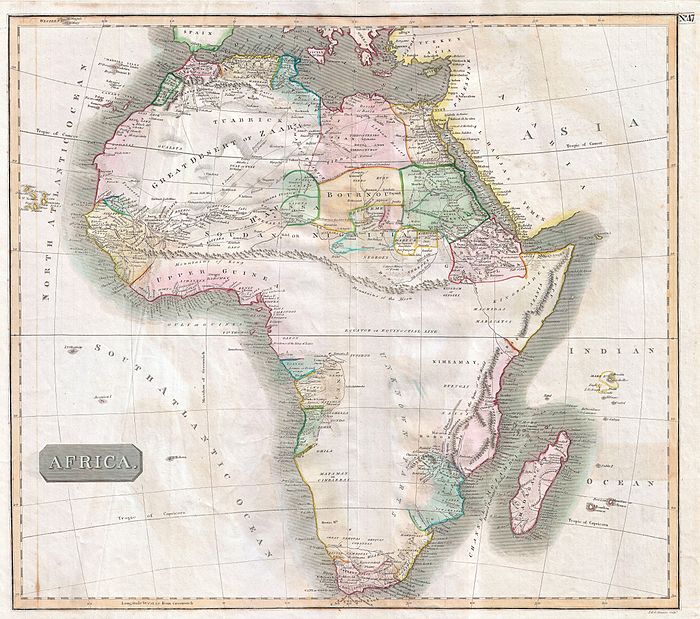 Sub-Saharan Africa was discovered by European explorers in the 15th century. It was probably some time later that the inhabitants of Africa discovered that they had been discovered. Since then the ‘developed’ world has had an ambivalent attitude towards Africa: being a place from which you can extract, and; being a place to which you give. On the one hand it is a continent of abundant resources (human and physical). On the other hand it is place that is desperately in need of help, aid, development.

I’ve just read an editorial article in Academy of Management Journal (AMJ) entitled Bringing in Africa: promising direction for management research. Just as Africa was ‘discovered’ by western explorers, so management researchers are being encouraged to discover Africa. The article opens with a belated statement that

Africa is beginning to capture the imagination of entrepreneurs, corporate executives, and scholars as an emerging market of new growth opportunities’.

Although I’m sure this isn’t too inaccurate regarding many management scholars who may be slow on the uptake, my understanding of the history of Africa is that it has captured the imagination of entrepreneurs and corporate executives for centuries.

I wasn’t aware of these authors’ previous work on management in Africa (but then they weren’t aware of mine), and indeed a quick search revealed that of the five authors only Jane N. O. Khayesi had published on Africa (also with one of the other authors as co-author), and that this might be worth exploring. Interestingly, she starts off a contribution in the book Entrepreneurship in Africa, Chapter 13: ‘Culture as a facilitator and a Barrier to entrepreneurship development in Uganda’ by writing ‘There has been substantial scholarly interest in culture as an institution that affects human life, including entrepreneurship’. I’ve never heard of ‘culture’ being described as an institution before, and this set off warning bells. But that, at the moment is a side issue that I’ll come back to.

What jarred on me slightly as I read the AMJ editorial, for supposedly one of our ‘top’ journals, was the lack of awareness of the rich recent history of research and publications on management in Africa, as though the authors had suddenly stumbled upon focusing on Africa as a good idea, and quickly undertook a review of some of the literature they could get their hands on. I must admit to a certain personal interest in this, as none of my work was mentioned. But neither was the pioneering work of Moses Kiggundu, Peter Blunt and Merrick L. Jones, Ken N. Kamoche and many others. Rather, they trot out the same World Bank/IMF mantra that

The greatest challenge to business in Africa stems from the persistence of institutional voids, understood as the absence of market-supporting institutions, specialized intermediaries, contract-enforcing mechanisms, and efficient transportation and communication networks.

Here, clearly, the term ’institution’ is used in a different way to culture as an institution. I thought we had moved beyond blaming weak institutions as a source of all Africa’s ills. They may now refer to new technology in how this is being overcome, but this is old news. With the lack of terrestrial telecoms in many parts of the continent, mobile phone companies have long seen this as an opportunity to develop mobile network technology. This goes back to the old anecdote said to be based around the way the Czech/Canadian company Bat’a developed their footwear business in Africa. Previously an American shoe manufacturer had sent its representative to Africa to check out the market. He reported back that nobody wears shoes here. There is no market for them. Bat’a sent their representative who reported back, nobody has shoes here, the market opportunities are endless. As Bat’a had prospered in Africa, so have the mobile phone companies. But with this lack of institutions in the western sense, so has the informal economy prospered, making it by far the biggest provider of jobs, goods and services in Africa. And, largely unassailed by western management ideas and practices.

As with many multinational businesses, that by the way have seen Africa as a business opportunity for many, many years, these authors appear to want to offer another form of colonisation of Africa:

Our objective is to inspire management scholars to adopt Africa as a research context, by demonstrating how these understudied phenomena influence existing theories as well as how newly emerging phenomena have the potential to generate new theories in management research.

In order to emphasise who will benefit from this scholarly endeavour, they further write:

In order to understand how management scholarship has benefitted from the continent as a research context, we give an overview of this emergent literature.

This raises a number of issues in my mind that need to be challenged. That this ’emergent’ literature is now in fact well developed and far from emergent is partly an issue with this article and the way it approaches its subject matter, but more importantly, and connected with this perception, is who this proposed project seeks to serve. They go on to explain that:

As I pointed out in my article for the inaugural issue of Africa Journal of Management we can distinguish scholarship on Africa, scholarship for Africa, and scholarship from Africa.

Scholarship on Africa, representing the earlier days of research, presents Africa as a problem to be solved, Typically weak institutions, poor governance, inefficient and sometime corrupt management, unmotivated employees. Clearly this type of scholarship persists, at least this is what this article appears to be proposing.

Scholarship for Africa moves towards solving the problems by proposing what is best for Africa. ‘Building capabilities’, ‘promoting managerial capacity’, building ‘positive employee behaviour’ and encouraging ‘ethical values’ are clear contenders. As I pointed out in my article, this is informed by modernisation assumptions. Such assumptions are ripe in international management studies, and clearly apparent in this editorial.

Scholarship from Africa is a whole new ballgame. This is really where we need to start to think and encourage scholarship, and this is where the AMJ editorial should have begun, as this is where we are at the moment with African management scholarship. One of the biggest challenges is capturing the collective knowledge from where all the action takes place. This is largely in the informal economy. This is where the debates start about what is indigenous knowledge, management and organisation. The challenge is not weak institutions, nor is it poor management or unmotivated employees, it is understanding and working with the power dynamics that are very apparent in Africa, and indeed in scholarship about Africa, if one cares to look. This is subject to critical review by, for example, scholars employing postcolonial theory (PCT). But with the increasing influence of China in Africa that challenges previously understood power relations, even PCT is out of date. We are no longer solely dealing with the same colonial relations that have previously underwritten critical scholarship that has challenged traditional views of the ‘Dark Continent’.

The authors of this editorial are right to assert that ‘scholars can examine how phenomena of relevance to management in Africa extend or modify our existing management theories’. Yet I don’t think their proposed research agenda does anything to assist this. They seem too keen to bring to bear western theories and assumptions about Africa, its problems and how knowledge about Africa should be developed. Although not perfect, indigenous research approaches have been developed by pioneers such as Linda Tuhiwai Smith. These approaches are promising for working in the informal economy in Africa, where we might learn something about not only the future of Africa, but also how we might integrate this knowledge into the mainstream.

In a way I laud the attempts of mainstream management scholars in thinking about Africa and how it should be included in our management theory. Yet this should be undertaken with a better knowledge of the literature, particularly the critical literature. Much of the work that these authors are proposing has already been done, although perhaps not so much in the type of depth and breath that other regions have been studied. What is now needed are new approaches and perspectives, critical approaches that tackle the issue of power dynamics and how it impacts on the research we do. I agree with the authors that we need to learn from Africa, but how we go about this is the key issue here.

The authors mention ‘the nascent African Academy of Management’ in their article. Although a great initiative led by excellent scholars, in a blogpost in 2013 coinciding with its inaugural conference I was quite critical because I was worried. I want to finish now by reproducing the same warning, as I believe this is still relevant:

It is great that the AoM [Academy of Management] is at last taking notice of Africa, after many of us have been working away over the last decades, even trying to attract the attention of AoM journal editors and convince them of the value of studying knowledge from Africa. My main concern is that this embryonic mainstreaming will result again in Western theories being proselytized and tested in yet another non-Western context, that ‘indigenous’ management concepts will again be frozen in time and commoditized (as in the case of Ubuntu for example), and that ‘learning’ will be from North to South, not South to North or South to South…… I do hope this will not just mean that African scholars as co-researcher (or data collectors) will simply have their names attached to articles going into Western journals.