Food security is a big issue in the world today. It is second on the list of the UN’s 17 Sustainable Development Goals, after ending poverty. It is an issue that has to be managed. It has to be managed internationally, and managed across cultures. Yet where is the consideration of cross-cultural management in any of the literature or policy on food security. From the UN we are told that ‘Ending hunger demands sustainable food production systems and resilient agricultural practices’. With an emphasis, quite rightly on Southern Asia and Africa, we might forget that this is a serious issues affecting communities around the world, and at the personal level intimately connected to the rise in poverty and inequality. Take for example the rise of food banks in the UK. Okay, this is a political issue, connected with globalisation and the dominant neoliberal orthodoxy, but it is certainly a global issue that has to be managed internationally and across cultures. It involves international supply and distribution chains. These have to be managed across cultural contexts. If this aspect is ignored or forgotten, we need to be seriously worried.

One of the leading books on global food security is Food Security and Sustainability, edited by George Mergos and Marina Papanastassiou. In their preface they assert that food security issues are of increased concern because ‘.the global terrain is different’ and ‘..the challenge needs to be met on all levels of the political system, that is, institutions of supra-national governance, national governments and sub-national actors’. Although there has been efforts at UN level, there appears to be a vacuum at ‘national, sub-national or even household levels due to its complexity and the difficulties encountered at policy analysis and design’.

So, what needs to be managed, and why does this need to be managed cross-culturally? Let’s have a look at fast food. In Ghana this is rice. Yet rice is one of Ghana’s biggest imports, as it is in the rest of West Africa. Ghana spends $450 million annually to buy 70% of the rice it needs. This is a huge drain on national resources with the added vulnerability to global food price spikes. A repeat of the global food crises of 2007-8 could be a disaster. 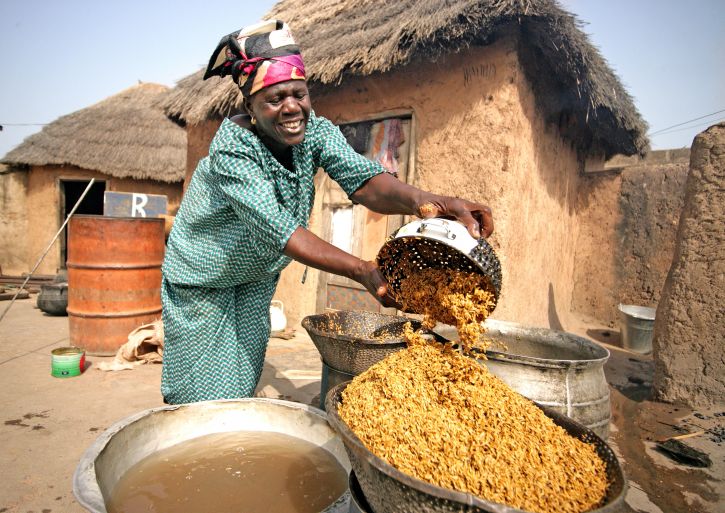 Ghana is fertile. It does produce rice. But the many (international) projects to develop large scale production have largely ended in failure.

Let us look at one example:

‘Aveyime, just a few hundred yards down the road from lush paddy fields being tended by small-scale farmers, an enormous rice mill – along with the array of vehicles, machinery and giant silos around it – sits idle behind a padlocked metal gate. Beyond it stretches hundreds of hectares of land, much of it neglected and covered in weeds.’ Guardian 2013

The excuses for such failure include a lack of funding. Yet there are also major issues with projects not focusing on the overall context of producing rice in Ghana, and a lack of trust.

Cross-cultural management specialists deal in appropriateness. So, when we hear accounts such as those from John Manful from AfricaRice who says “Every country you go to (in West Africa), you will hear stories of impressive-sounding rice projects that just fell flat… .There have been countless attempts but so many have just not worked” we have to ask the question, was it appropriate? Who said it was appropriate? What was the process for deciding ‘appropriate’ policies and practice’? Who managed the situation and how? What were the mechanism for deciding the cultural appropriateness of these project?

Shifting now to Niger, and the meat market. Policy makers have given pastoralists a really tough time despite their potential to contribute significantly to a major export market. Yet which policy makers have ever asked indigenous pastoralists what they think? Where is the policy that reflects the views of the pastoralists themselves? Much of the policy, and actions from development NGOs, appears to be directed at getting rid of the pastoralists and favouring settled farmers. They are labelled ‘backward’ or ‘irrational’ with policy makers in some countries aiming to forcibly settle their pastoralist population. Yet, with 43 percent of sub-Saharan Africa comprising arid or semi-arid lands, and 50 million pastoralists living in these areas with their livelihoods dependent on rearing and selling their livestock, what is the justification for ignoring their views? As in the case of the small-scale rice growers of Ghana, who is in the best position to make decisions about how best to prosper in conditions that may be quite different to those in the West? Most principles and practices of agricultural management have of course been developed in the West. But is this best practice in Africa’s arid and semi-arid areas?

As Erica Phillips in her excellent case study puts it:

‘Pastoralists have adapted to arid and semi-arid environments by employing a complex system of livelihood strategies developed over thousands of years in response to climatic variation, seasonal changes, and drought. The most important of these livelihood strategies are mobility and access to grazing land’

Fulani pastoralists travel thousands of miles with their herds over a year to take advantage of shifts in rainfall and other seasonable variables. Yet they tend to favour a home territory: lands that are not private property but governed as common pool property where grazing rights have been negotiated among families for hundreds of years although having no formal rights over the use of the land. However, traditional cooperation between pastoralists and settled farmers has been disrupted over recent years with a subsequent reduction in grazing land for pastoralists.

Although increases in population and demand for land have been factors in disrupting relations, changing land tenure laws, the management of natural resources and changes in market structure have also had their impact. Yet, what is most telling, is explained by Phillips, as follows:

‘…well-intended government and NGO projects have altered traditional interactions. For instance, Fulanis traditionally have a complex system of common property regimes through which access to water and pasture lands is negotiated between users. Individual ownership is rare, since groups depend on reciprocal arrangements to ensure mobility. In the 1980s, however, the government built watering points — cement-lined wells and boreholes — in eastern Niger. Conflict resulted as different pastoralist groups, including Tubu, Arabs, and Fulani, competed for water and land around the watering points.’

Cross-cultural management specialists should have something to say about this. Why is this situation being managed in seemingly an inappropriate way? Although international agencies are involved in national and local issues, there appears no joined-up processes and systems for managing issues that have such local (livelihoods), national (income) and international (exports) importance and contribute to food security generally.

Cross-cultural management scholars have for years been researching factors that are highly relevant and can be applied to ensuring food supply and distribution are managed appropriately at local, national and international level. Our combined knowledge on cultural differences, cultural intelligence and cross-cultural teams, as well as the way cultural interactions can be managed and more importantly what can be learned from the proper integration of local and indigenous knowledge into international and global processes can all make a huge difference.

Not only are vast sums of international aid being wasted, local livelihoods are being disrupted through employing inappropriate solutions to problems that are not even properly defined and analysed. Food security is an area that should be a focus of cross-cultural attention through research, analysis, training, education and policy implementation. It’s not just the international development specialists who need to wake up to these basic issues. Cross-cultural management experts need to apply their expertise to solving these challenging issues that are crucial to all our futures.